Since Ironman Wisconsin I’ve been on a silly roller coaster of “what should I do next season?” In the weeks leading up to Ironman I had a plan that I was excited about, and swore I was going to stick to it. It only took a few days, but I had a change of heart. I think.

Original 2020 plan:  Grandma’s Marathon and Marquette Marathon with a first attempt BQ goal. I know and have witnessed many runners train for years, missing a BQ by just seconds. If I pursue that goal I am fully aware and respect that most people don’t qualify in their first tries and I am not likely to be an exception. The first step in accomplishing a goal is to try, and that is/was(?) the plan.

Now 2020 plan:  ….I have typed things here, backspaced, deleted, changed my mind the next day, an hour later, … 10/7/19 edit…HAHA I started this blog draft over a week ago. The plot keeps twisting. John has since qualified for Boston Marathon 2021 with a 6 minute buffer. He wants me to qualify so that we can run it together in 2021.

I have thought long and hard about all of this, giving myself time and not letting myself register for anything on impulse–heh, minus that sprint triathlon in Ohio and now a half marathon two weeks before Indy Monumental–What is wrong with me?!!

Here’s what I think I know; I do not have a good relationship with the marathon. Since my first one in 2010 I have always had a battle with every part of the process; picking the right race, training, taper, race week, race day and my performance. I always kick dirt and wished it could have gone better.

A (brief-haha) personal history of marathons: 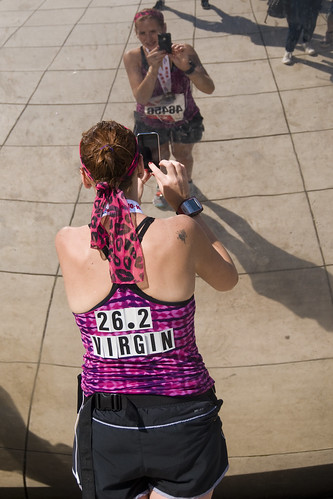 2010 – Chicago Marathon in October. It was my first marathon. I used Hal Higdon’s Novice I training plan and I was just learning how to fuel for long distances. Race day was 80+ degrees, in October. It did not go well. While we all know your first marathon should not have a time goal, I thought I could finish in less than five hours. I finished in 5:17 and was fiercely determined to shed a full hour off of that finish time.

2010 – Rails to Trails Marathon in November. My stubborn fierce determination landed me at the starting line of my second marathon just four weeks after my first. Not only stubborn, but stupid, as I went into the race with some lingering knee pain after Chicago Marathon. I had to break five hours. I did, but I sure paid for it with an entire winter off of running nursing runner’s knee. On a positive note, this injury is what led me to the pool, which led me to triathlon.

2012 – Wisconsin Marathon in May. Still stubborn, thought I knew it all, unwilling to do what it takes to really improve. Five minute PR, 4:48.

2012 – On The Road for Education Marathon in Iowa, October. I was actually signed up for the Haunted Hustle Marathon in Middleton, but a few days before the race the weather showed 100% chance of rain and 40 degrees. It looked miserable so I drove to Iowa where it wouldn’t be raining, but I did get to enjoy 20+ mph wind gusts. A hard earned PR.  4:27.

2014 – Ironically my Ironman Wisconsin marathon was 5:17, the same as my first Chicago Marathon, yet I was proud of the time in this case.

2015 – Haunted Hustle Marathon, 4:38. I was so trained and ready to finish in my now five year goal of 4:17 (shaving an hour off of my first Chicago Marathon). This was the marathon where I learned about going out too fast. It was also a challenging, hilly route through some country roads where I don’t even like riding my bike up. John and I did win the costume contest though.

2018 – Madison Marathon. FINALLY- 4:15- An hour off of my first Chicago Marathon time.  Truth be told about this race is that I went out greedy. I worked with a coach and I was too cocky to follow my coach’s plan. I followed the 4 hour pace group up until mile 18 when the hills of this course began to eat me alive.

2019 – Starved Rock Marathon. With newfound speed in my legs I set an ambitious goal to break four hours. I didn’t do much research on this course, and didn’t realize until race week how much elevation climbing there would be. To make it extra fun the race officials had to change the course due to area flooding, doubling the elevation gain. A PR on a tough course, but not sub four. 4:07.

I didn’t include every marathon in my recap above. Ironman marathons are their own story. In just this rundown of my marathon history the biggest lessons I can pluck out are:

I’ve attempted some big for me goals on tough courses and walked away discouraged. Right now I’m training for the Indy Monumental Marathon on November 9 with the goal of breaking four hours. As of right now, I know I am doing the work (that I can with the time I have) and have picked the right course. For added self-induced pressure I think the outcome of this one will push me in one way or the other for my 2020 race calendar.

I have five weeks to train like I’ve never trained before, to continue the “what-ifs”, and to keep enjoying this ridiculous journey!