When I registered for Coeur Sports Camp back in December I thought we were going to run a little and hang out. I knew no matter what we actually did I would enjoy a week in California away from Wisconsin winter conditions, plus train with my favorite women in triathlon!

When we got our camp agenda I realized that we were going to be working out, a lot! Each day was filled with swim, bike, and run from morning to late afternoon. The workouts were incredibly tough, but so beneficial and led by two of the best coaches in triathlon, Lesley Paterson and Simon Marshall. Leslie is a 3-time world champion in off-road triathlon, an Ironman triathlon champion, a professional mountain biker, endurance coach and foul-mouthed Scotts lassie. Simon Marshall, PhD trains the brains of endurance athletes and fitness enthusiasts to calm the f*ck down and become happier and more mentally resilient.

For this triathlon loving girl, it was heaven!

Some of my personal camp highlights were…

Riding a rental bike up Mount Palomar. Wow! What an experience. I was nervous being on a rental bike that I’m not familiar with, plus it was a rode bike. I haven’t been on a road bike since approximately 2010. The shifting was so foreign to me I didn’t realize until five miles in that I was in the big ring! Once I shifted down my legs were spinning quicker and I felt more confident that I’d make it to the top. Around 90 minutes in I hit a wall, but I was so close! I put my head down and kept spinning my legs, while enjoying the stunning mountain views around me. It was breathtaking!

Meeting the Coeur Sports Squad. Many of the attendees were women who I am connected with on social media. We are a family and it was comforting that there were no awkward introductions. Conversation and laughter was easy. Support for one another was abundant. These women are incredible!

5K trail run. This was on day four of the camp and I showed up wearily, telling people, “I’m pretty sore and fatigued. I’m going to take this easy” and instead I ran like a bat out of hell, fast. There were two mid-sized streams/puddles of water that could either slow you down to tip-toe around, or barrel through. I chose barrel through, and it felt so badass! I finished in 24:03, a 7:51 average.

Burritos on the beach. I mean, what’s more to say than that? We got to soak in a beautiful California sunset on the beach. There was also the incredible, pinch-me-is-this-real-life? beach party on Sunday ending camp! 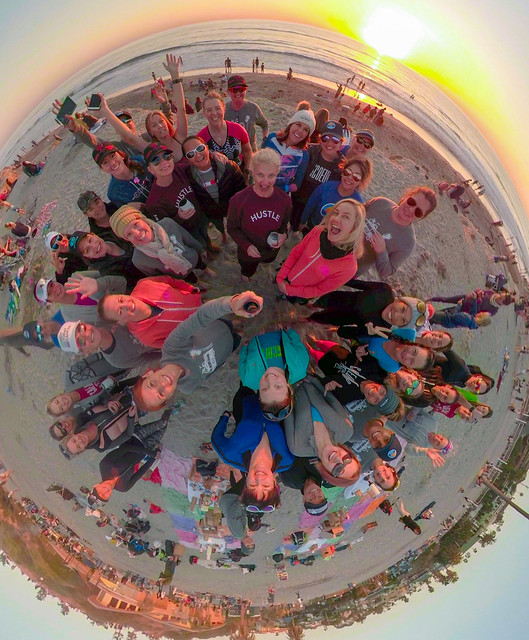 Bike ride through the Elfin Forrest. This was on our second day of camp, my first ride outside in many months! The rolling hills felt just like home to me, the scenery, sunshine and warmer-than-Wisconsin temperatures were wonderful!

Goat Yoga. This was a bonus, after-camp addition if you could stay longer than Sunday. It was the most I’ve ever giggled in a yoga session! Baby goats roamed around and even a llama joined us!

Would I go back? Yes, absolutely, sign me up!

I’m so glad I went and experienced everything that Coeur Camp had to offer! The physical and mental strength I gained at camp will be beneficial for many seasons to come!