Hey, are you lost or low on calories?

The thing that nobody tells you about counting your calories is how on day six you will lose your shit and throw things. I’m on day six, I’ve lost my shit four times in the last twenty-four hours. I’ve snapped at ridiculous things too, like I couldn’t find my 2016 Ironman finisher jacket. I needed that jacket, no other jacket would do.

I had a snack, John found my jacket, and everything is okay again. We’ll get through the great calorie deficit of December 2017!

Saturday was Global Fat Tire Bike Day, which we spent at CamRock Cafe and Sport. We went to their event last year and had a ton of fun. This year, I managed to get lost and angry in the woods. Again, the calories. I needed a snack, or a PBR. There were three beer stops and I followed some guys onto the wrong trails where I missed the second beer stop. I could hear the hoots and hollers through the woods where the second beer stop was, but could not figure out how to get there or how I missed it. I backtracked and luckily some nice guys said, “Hey, are you lost?”

I followed them back up a bluff that I had already climbed, the second time I wasn’t in the right mindset for it and just upset that I had gotten off track. I fell way behind these nice guys because I’m not good at the technical off-road trails. When I finally reached the point where I had gotten off track one of the really nice guys was there waiting for me to lead me in the right direction. Hey Santa, this guy was over the top NICE, leave a great cycling gift for him!

Though I had moments of frustration with myself, it was still fun and we got to enjoy an awesome colorful sunset. Seriously, no filter! 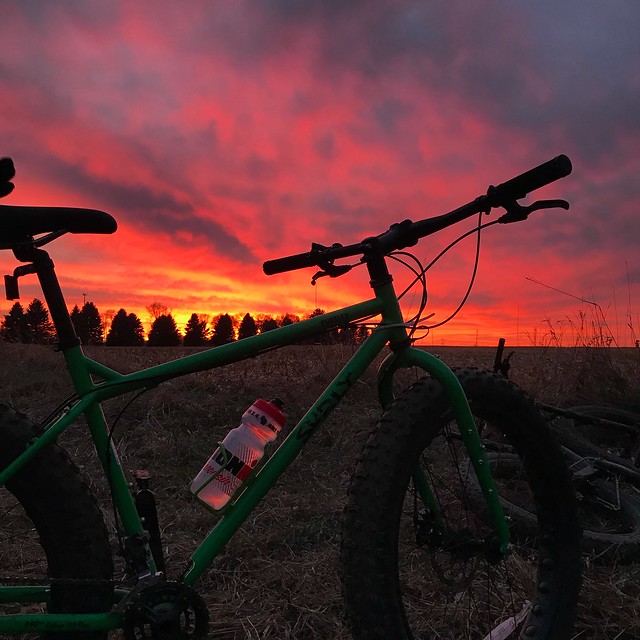 So I swam. My arms felt kind of trashed from death-gripping onto the handlebars of the fat tire bike, but the sun was shining through the window and into my lane. When the sun is shining I just keep swimming! I ended up knocking out 2500 yards!

Later a friend posted a status on her Facebook looking for a casual ride outside. When it’s 50 degrees in December, YES, why not? I met up with her and another friend and it was such a joy to ride leisurely. I went Garmin-less. We rode, we talked, we laughed, it was an all-around great little ride.

Aside from a few low-calorie rage instances, it was a fun weekend! My body will eventually acclimate and find a balance. If it were easy, then where would all the adventures be?