During my bit of unemployment I said this..

The first thing I do when I get a job is buy more @CoeurSports stuff, and then chocolate. And margaritas. And race registrations.

So, yeah, I bought a lot of Coeur stuff! I got the Tropical Punch kit, which I salivated over when it was released as their Kona edition. I couldn’t possibly buy the Kona version, even though I was reeeaaaally tempted. Their 2017 line is up, go peek!

John and I did celebrate my new job with some margaritas at Pasquals. I didn’t get any chocolate (didn’t really want any), and didn’t do any race registrations. But, I did sign up for Ironman Wisconsin a couple weeks ago! When I signed up I didn’t really tell anyone or announce it because I felt like I had to hide it from my previous employer (you know, the fitness company?). So here it is, loud and proud, I’m GOING TO HAVE SUCH AN AWESOME IRONMAN WISCONSIN 2017 MORGAN FREEMAN SHOULD NARRATE IT!

But things are good! I’m feeling more free, like myself, still spending time doing the things I love. Last weekend was Global Fat Tire Bike Day, which is now my favorite holiday. We celebrated at Camrock Sport & Cafe in Cambridge, WI. There were over 100 fat-tire bike enthusiasts out, riding trails, and enjoying the beer stations along the way.

I ended up riding some technical trails that I normally skip because the fat-tire bike culture is so encouraging. I was at a fork where I normally turn right, but the guys at this beer stop gave me a nudge and said we’re all going left. When I told them I can’t handle those trails one guy said, “It’s okay if you walk your bike on the steep parts” and then ten minutes later, I was walking my bike up those steep parts. I’m so glad I went along with the group because it was such a riot hanging out in the woods with a bunch of fat-bike strangers cheering people on. 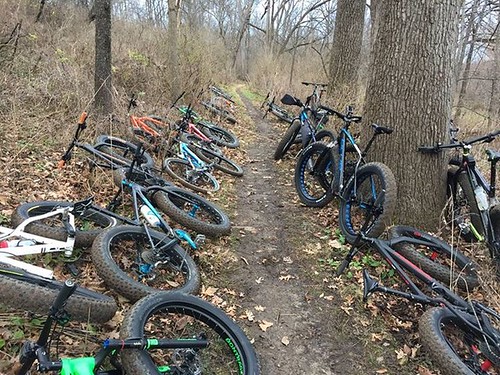 The other thing keeping me busy and feeling structured is Fellow Flowers is hosting a #moveyourass challenge. It’s a daily challenge with over 2000 members to do physical activity for thirty minutes a day from Thanksgiving until New Years Day. I got to day 12 and then was taken out by a yucky flu-bug thing, but I jumped right back in once I felt like my body was appropriately rested and ready. It’s been really fun, getting creative with workouts, and supporting each other through the challenge.

My workouts have been semi-unstructured swims, trainer rides and a couple of runs here and there. Today I was reminded of how hard it is to run in snow. Wow! My legs were feeling it just four miles in. This off season is the most off season I’ve ever been. I’m going to enjoy it for now, because 2017 is near and I have goals!