I ran the Lake Monona 20K and then additional miles after the race. After the race when someone asked me how my race went I responded with what would make me cringe if I saw someone else respond this way:

What the heck, self? Get it together.

After saying that I reminded myself of my original goal going into the race. It wasn’t a time goal, I didn’t even care of it was going to be a PR. What I wanted from myself out of this race was to run it strong, mentally and physically.

Like I mentioned in my post prior to the race, my quads were fried from a boot camp class that I had to attend for work. Race morning, within the first footstep of my warm up I knew I was in trouble. Argh. F r u s t r a t i ng !!

I started the race, knowing full well that it wasn’t going to be the race I had trained for, and then I’d have additional miles to run after. I went out conservatively and my pace kept slowing down further and further. By mile six I knew that even with my slowing pace, as long as I kept my shit together I could still PR. That’s all that kept me moving really.

It took a few minutes to catch the pace group, and I ran with them for a few minutes. Then I overheard the pacer say “We’re about a minute and half ahead of pace”. Oh screw it, I slowed down. Pacers drive me batty. Run the pace. It screws with my head if they’re ahead.

I had no idea if I could break two or not at mile 12, so I took off believing I could. I could have, but I didn’t. I finished in exactly two hours.

I had my post-race beer, cheered a friend in, met up with a couple of runner friends, and then decided if I was going to run home I better do it now. I gave John my second beer ticket, he stuck around enjoying my beer, as I shuffled home. My shuffle home was a yucky feeling run/walk in the double digit minute miles. Normally for a peak long run I like to do a 3 hour run, which usually equates to about 18 miles for me. With how fried my quads were, and surviving a run/walk home I called it a day at 17 miles. The run just wasn’t beneficial for my upcoming marathon at this point.

What I’m not proud of is that this is not a mentally stronger run over 2015’s race. I mean, at least this year I didn’t have a meltdown at mile 9. This is a six minute 20K PR, which I am proud of despite my leg conditions. 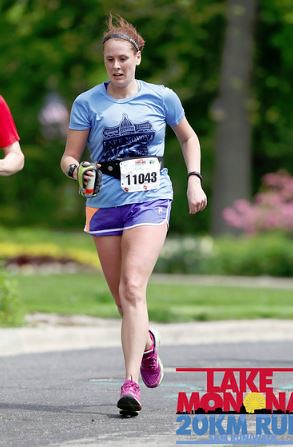