One of my goals for 2016 is to break six hours in a 70.3. I have two shots at it this year, one at the inaugural Milkman 70.3 in June, and a second chance in Racine in July. With this goal in mind I’ve been making a point to put some meaning into the miles I’ve been logging. Instead of just swimming 2000 yards I’m incorporating speed work. Instead of hopping on the trainer and watching Netflix for an hour I’m selecting pre-loaded workouts from Zwift to follow. When I’m not having a fit on the treadmill I’m doing intervals. Having a purpose for each workout is how to get better, I hear.

This morning when I woke up for an eight mile run I wasn’t sure my legs had much to give today. I did six miles of intervals on Tuesday, 1800 yards of intervals and an hour on the trainer on Wednesday. Lots of fatigue was hanging out in my hamstrings.

I leashed up my pup Ziggy and took him out for the first three miles. He probably needed the run more than I did. He’s such a trooper too, if he got sidewalk salt stuck in his paws he’d run on three legs until it fell out. I try to avoid the salt, but sometimes it’s a choice of salt or running on the road into traffic. 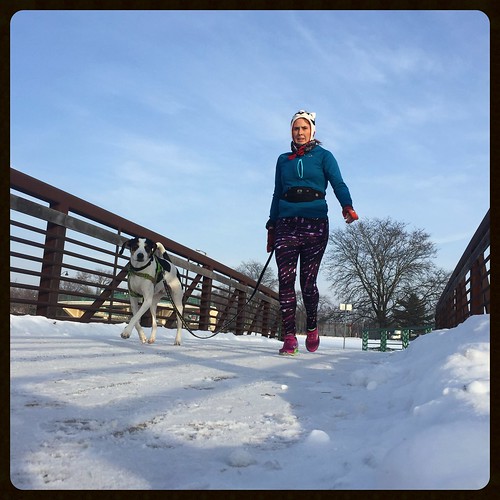 After I dropped Ziggy off I went back out to run on some hills. When I got to a road that I know the Milkman course will run on I tried to imagine myself running up those hills strong on race day. There were discouraging moments, but surprisingly my splits remained intact.

Is this progress I already see? Whatever it is, it sure squashes some of that self doubt that was creeping in.