This sums up the sad state of my off season… 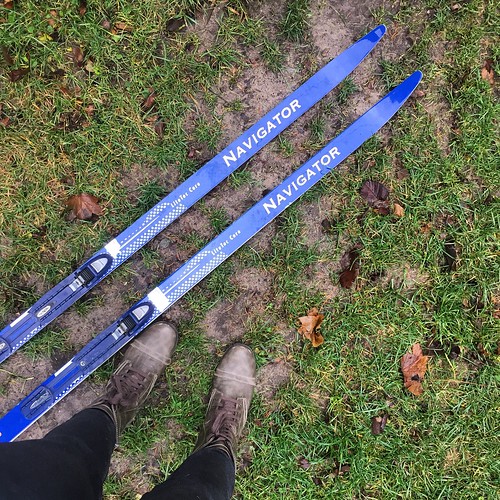 In the past I’ve always had a blast during my off season, shaking up my workout routines with some cross country skiing. I also own a pair of snow-shoes that haven’t seen a snow covered trail in years.

Where is the snow?!!

On Saturday I went for another ten mile run, in the gloom of a snow-less December. John and I started from downtown Madison so that we got to run through different scenery away from our neighborhood. It was nice, around the bay, down State Street, through campus, and up Observatory Drive. Up Observatory Drive I was shocked at how hard it felt to run up that thing. Just two months ago I did hill repeats on it weekly, now I could hardly get up it once!

It’s kind of amazing how quickly the body adapts to what I’m doing. If I’m doing nothing, my body relaxes. If I push my limits with hill repeats and intervals, I feel strong.

Come January I’ll start thinking more about Ironman Wisconsin 2016, shaking off the off season uglies. Speaking of uglies, I’ve gained a few pounds. Those have to go, stat.

One thing that is going well is cycling indoors on a trainer. I’ve been creating my own interval workouts, cringing, sweating buckets. Yesterday I tried Zwift but my modem is dying and I couldn’t keep a connection.

Swimming is going fairly well too. I’ve been making it to the pool once or twice a week. Last week I brought a workout that Triathlete Magazine posted, and was impressed by John actually doing the entire workout of 2100 yards. Swimming is not his forte, but he’s really determined!

Though I’m bummed it’s dark and gray out there, I’ll just be over here dreaming of a White Christmas.