Where do you start a story when the weekend begins with a twelve hour drive in a van with your triathlon besties to Oklahoma?

The swim. You start with the swim. Let’s just dive (ha) into it.

Prior to getting into the water, Clare reminded me that Redman Triathlon was a USAT Long Course Championship qualifier and there was a lot of fast people there. Knowing that, I planted myself behind quite a few women in my wave. Whoops. I spent the first 400 yards tarzan swimming, trying to avoid getting kicked in the face, looking for an open space to swim. My second mistake was not seeing that the turn around buoy we were swimming to was at a slight diagonal to the left, I swam straight. Half way there I looked around, “Where the hell is everyone? Oh, way over there. I’m a bit off course!” I don’t wear a watch while I swim, so I didn’t know what my swim time was coming out of the water. When I saw Clare at T1 before me, who started in a wave behind me I had a feeling my swim time wasn’t what I expect of myself.

Onward, to the bike. Coming out of T1 I saw @thatpinkgirl and her main squeeze in costumes cheering. I’ve been internet friends with her since 2010, seeing her in the flesh for the first time I was speechless. I whizzed by with my jaw hanging down, waving, wasn’t even sure she knew who I was. It was such a happy moment knowing she was there!

The actual bike ride was amazing. The miles ticked by so quickly, because I was riding the fastest I ever have in a race. I wouldn’t call the course pancake flat, or even say the hills were rollers. There were inclines, but nothing like we see in Wisconsin. It was such a great feeling to feel strong on those inclines, and only slow to 16 mph going up. At the half way point turn around, my clock read one hour, thirty one minutes. Crap. This meant I was dramatically close to breaking three hours if I could pick up my speed!

I can’t do mph math in my head when I’m on the bike. I kept my eye on my mileage and time, pedaling the best I could knowing how close I was. In the last three miles I could see how stupid close I was. Do not let sub 3 out of sight, keep pedaling, you will be SO MAD at yourself if you miss it by a few seconds, PEDAL HARDER, GO!! I squeaked in with my Garmin reading 2:59. It doesn’t display seconds so I wasn’t sure if I actually made it or not.

The run. Yuck. It wasn’t pretty. In long distance triathlon I force myself to run the entire first mile to set the tone for the run. At mile 0.95 I looked at my Garmin wondering if I’d ever find mile one. Close enough, I stopped to walk a bit. It was 86 degrees, full sun, no shade, and no wind. Not having wind was really great on the bike, but a breeze might have saved my run. I felt defeated to have to walk so early on in the race, I wanted to cry, but in triathlon you just keep moving forward. Go. The quicker you move, the quicker you’re done. 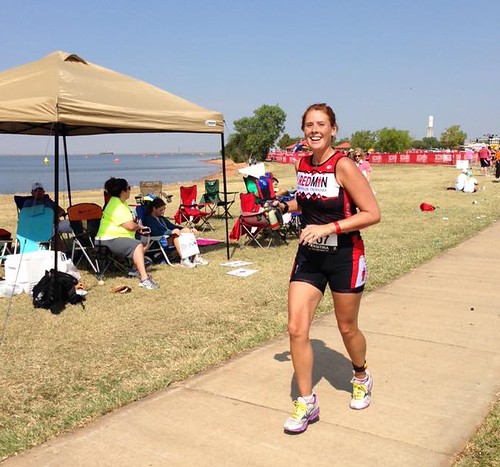 When I came back to the half way turn around, @thatpinkgirl ran/walked(?) with me for a bit and told me to get some cold sponges and put them on my hips. The next aid station didn’t have sponges, so instead I put ice down my tri shorts. Yup. It made me get moving. I felt better and even tried to have some fun on the second loop. A spectator asked me if she’d see me again for another loop and I responded “Nope, I’m going back to Wisconsin where it’s cooler out” She laughed and thanked me for my visit.

The finish was anticlimactic because of how odd the course was set up, in my opinion. The chute was empty and quiet until I actually crossed the finish banner where they have bleachers of spectators waiting for their family/friends. I was just happy I survived that awful run. When I got my results printed I was surprised to see that I actually PR’ed the 70.3 distance by 4 minutes! My goal going into the race was just to PR on the bike, which I did, and it was my first time breaking 3 hours!

I traveled further than I ever have for a race, had many laughs, ate a lot of Oreos, raced, and PR’ed. This will be a weekend to remember. 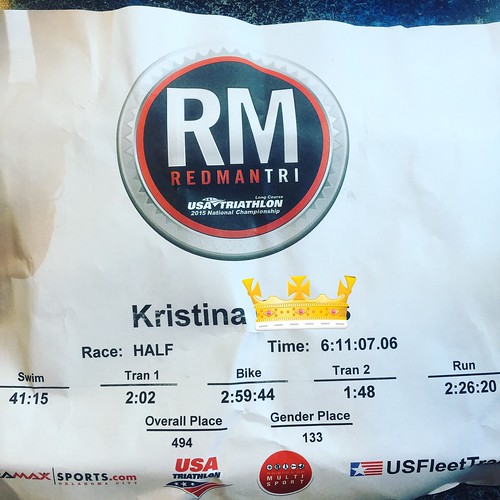 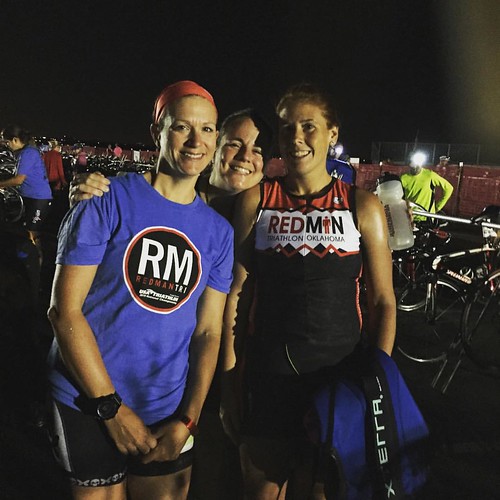