Fifty miles on the bike is too far to worry about your spouse who started in a wave 20 minutes behind me, and 57 miles is too far for a half iron distance triathlon. That’s what I learned at Ironman 70.3 Racine.

For the first time since 2011 when I started triathlon, I had a scare in my swim start. I started in the front, and took off wayyy too fast. Maybe 100 yards in I was gasping for air and my heart rate was entirely too high. I had to flop onto my back to collect myself, meanwhile being thrashed into by the hundred swimmers who started behind me. I was shocked at myself to think “I need a kayak back, I can’t do this” because I’m a strong swimmer! I’m not really a quitter either.

I doggie-paddled for a bit, tried a side stroke, back stroke, and finally after the first turn buoy I got back to my regular strong swimmer self and took off. I was able to catch up to the next two swim cap colors, so I thought maybe I made up enough of my lost time in my swim start biff, but my swim finish time was 37 minutes. It’s a decent swim time, but I know I could have done 35 minutes or less if I didn’t have an out of character panic attack in the start.

T1 is a fairly long haul from the lake to the transition area. I ran it knowing that in previous years my T1 time was always grossly long. It still took 5:03.

On the bike my legs felt heavy to start and it was windier than the weather forecast promised. I didn’t fight it, just did what I could. My Garmin read an average anywhere between 16.8 to 17.2 mph. I was okay with that, for not pushing very hard. My friend Jeff passed me somewhere after mile 10, so I expected John to be passing at any moment as well. Mile 20, 30, 40, where the hell is John? I started to really worry about him getting out of the swim. If I struggled in the swim, he obviously drowned in it! What if he DNF’ed? What if he quits triathlon? Worrying about him really put a strain on my energy levels. How the heck was I going to run 13.1 knowing he didn’t finish?

Finally mile 50 he passed me, I yelled at him, “What took so long? I was so worried!”  He didn’t slow down to explain, he just blew past. But seeing him lifted me back up and I started to book it at 20+ mph and got my Garmin average to read 17.5 by the end. It’s too bad the course was a mile too long, because the official results show 17.2 mph.

Some how we both exited T2 at the same time. We giggled down the T2 chute and he took off into the distance. The run felt just like it normally does, hot, hard, slow, sluggish. I managed to run all of it and only walk through aid stations. With it being 84 degrees, sunny, it was necessary to cool down at the aid stations. My splits were reading 10:40s. I want to get my 70.3 run down to 10:00 minute miles, but given the heat, survival comes first. At mile 11 I did half marathon math and saw it was possible to PR the run, so I picked up my pace as best as I could. I squeaked in just under 2:20, making it a 1 minute 70.3 run PR.

It’s also an eight minute course PR! This was my sixth half iron distance race, third time in Racine. It’s a fickle sport, anything can happen. I know I’ve improved since my first one in 2012, and the desire to keep getting better grows with each race.

I’m also really proud of John and glad he continues to kick ass in his race! 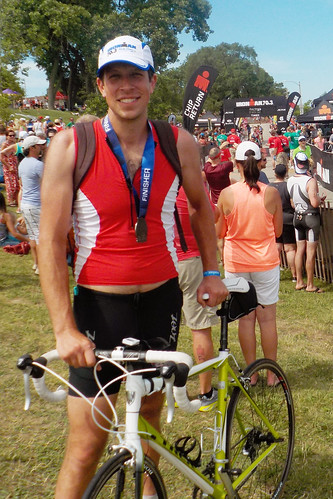 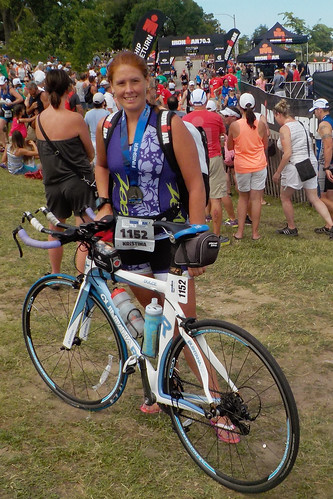