I raced(?)/participated in my fourth triathlon this month on Saturday morning. With it being just one week after a 70.3 that I did race and PR at, and then take a full week off of workouts, I had no goals going into it. Just show up, enjoy the triathlon fun!

The triathlon was Triterium Triathlon in Verona, WI. I did the Olympic distance in 2013, and I remember it being very difficult two years ago. Two years ago I was a much weaker cyclist, and it poured crazy, bad rain. On Saturday it was a perfect 70 degree day with little wind, little humidity, and I like seeing the sun!

It felt weird to not overthink packing my gear and setting up transition. That’s what happens when this triathlon thing becomes routine I guess. My transition was set up promptly, and I spent the rest of my pre-race morning chatting with my triathlon buddies.

Thankfully the swim was an in-water start. I placed myself next to the buoy line and behind one girl. The gun went off and I took off like I normally do, except I didn’t feel like I was ahead of the white swim caps. There were quite a few people passing me. It felt off, I probably shouldn’t have worn a wetsuit!

T1 was the usual, fight with the wetsuit, and go! The bike course is tough. John asked me to compare it to Capitol View Triathlon, but it’s apples to oranges. The thing that makes Capitol View Triathlon’s bike course tough is that you can’t take your downhills at full speed, because there’s a sharp turn at the bottom of that hill, and then go straight up another hill. That’s really hard! At Triterium you get non-stop hills, but you get to ride those downhills. Within the first ten minutes of my ride I realized that my legs were still fatigued from the 70.3 last weekend, so I took it easy. No sense in fighting fatigue.

T2 was quick, just socks, shoes, running belt, and GO!! The run course was immediately confusing. There was three-way traffic. What the heck. It was so weird, and I wondered where this three-way traffic was leading. I was running comfortably strong, passing several people. I tried to be encouraging as I passed, but I just don’t have a cheerful voice when I’m running. It probably comes off the wrong way. I’m probably overthinking that.

When I got to the end of the road there was a turn around, or a turn to the left. I did the turn around, which was the right choice. If you guessed left, you cheated yourself and only ran approximately 2 miles. I know this because I have a friend that accidentally went left. Why wasn’t there a volunteer here giving directions to disoriented runners? It’s completely frustrating looking at the results and seeing people with 20 minute run times, but slower swim and bike times. There’s a chance they are super gifted at running, but it’s more likely they didn’t do the full 3.1 miles.

I did my full 3.1 miles, and finished feeling pretty good about my results. The timing receipt read that I was 5th in my age group! A huge goal of mine is to win an age group award, so I was pleased to see how close I came while still recovering from a 70.3. 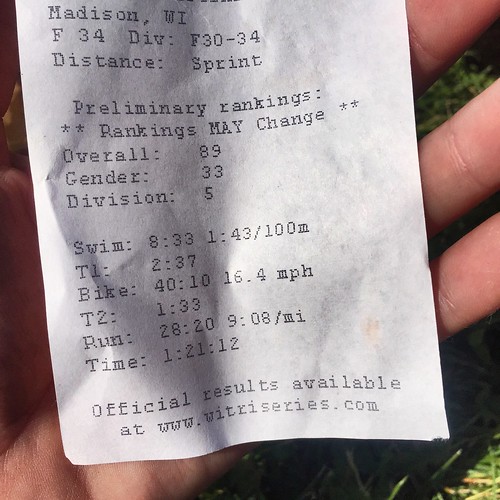 Speaking of my goal of age group placing, I only have one sprint distance race left this year to compete for that, in my current age group. I’ll enter a new age group in 2016! I peeked at the next age group division results to see how I would have done in that division…Outlook not so good. I’m going to really have to work a lot harder next year to get there. Let’s not worry about that right now though, let’s celebrate this finish! 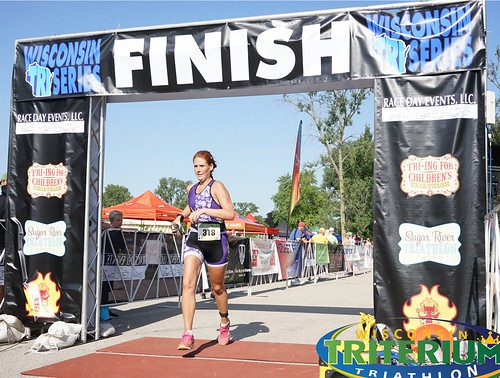