Looking back at my weekend’s long training miles, I’m feeling extra accomplished. I had some tough weather conditions to fight on both days.

On Saturday I had the challenge of having to work until 1:00, and then doing my run after. It’s a challenge to balance my appetite, time on my feet, and motivation to run after work. Not only that, but on Saturday it was raining all day, with a cool 50 degrees. John and I headed to “the woods” to run on trails. I suggested we separate and do our own solo runs and meet back in an hour and forty-five minutes.

The trails were mushy mud pits. There was a lot of spots I had to stop to try and tip-toe around, but my feet were completely soaked three miles in. I had ten on my agenda. Nothing I could do but grin, bear it, and keep running. Conditions were not ideal, but my legs felt fantastic.

Then on Sunday morning we woke up and it was 40 flipping degrees out. We went grocery shopping first, procrastinated around the house, and finally drove to Verona to ride the Ironman WI bike course. It was still only in the low 50s when we got there, and wiiiinnndy. Fourteen mph with nineteen mph gusts. Those gusts rattled my bike! The one thing that really stuck out to me about this ride is that I know that in past years I would have been absolutely pissed with those conditions. I recall crying during a 3 hour ride while it was brutally windy last summer. For whatever reason, one silly tweet struck a chord with me for days like that. I can’t remember who, but someone said “Next time it’s windy, pretend you’re in Kona”

So I hunkered down in aero position and kept my cadence up. I was mentally strong throughout. Huge improvement for me in my training right there. And to rub more inspiration in, when we stopped at Kwik Trip for more water there was a cyclist there in his Kona jersey. He asked me how I was doing, I responded, “the wind is getting me, is that what it’s like in Kona?”  He said “All day, every part of it”

That kept me moving for the next portion of our ride. It wasn’t until Stage Coach Road of the ride where I lost patience with the wind. If you’re not familiar with the Ironman WI bike course, Stage Coach Road is the absolute worst. It’s a mile of teeth-rattling rough road. That road, into the wind, boohoo, mental toughness gone. Soon after that we hit “the bitches”, the three big, nasty hills on the course. I have work to do over there! 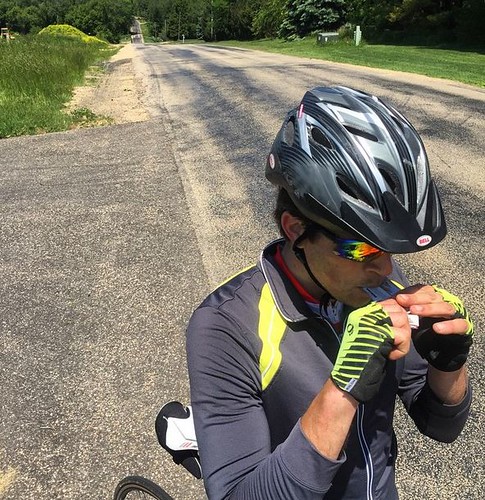 After the ride we ran a mile uphill, then swam a mile in a quarry. Basically world’s dumbest order of training, because my arms were having none of that swim. John was determined though. He got his mile in. I’ve created a monster!

With a great weekend of training brings another triathlon registration!